Washington: When Scott Morrison visits the US capital next week for meetings with President Joe Biden and other world leaders, he’ll also be keeping a close eye on events to the north of the border in Canada.

It is often misleading to draw overly simplistic connections between elections in different countries. But a snap federal election in Canada next Tuesday (Australian time) could offer important clues for Australian politicians about how voters respond to a ramped-up COVID-19 vaccination rollout.

Although Morrison has more in common ideologically with Conservative Party leader Erin O’Toole, he’ll be watching whether voters reward left-leaning incumbent Justin Trudeau for his handling of the pandemic as he considers when to send Australians to the polls. 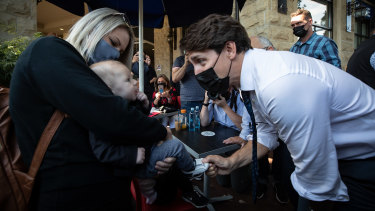 Faced with a shortage of supply, the Trudeau government was forced to plead with the Biden administration to access its stockpile of unused AstraZeneca vaccines. In February, Canada even accepted doses from the COVAX vaccine sharing scheme that was intended for developing countries.

But the vaccine rollout sped up impressively. Today 69 per cent of Canadians are fully vaccinated against COVID-19, one of the highest rates in the world. That compares to a rate of 34 per cent in Australia and 53 per cent in the United States.

Buoyed by the pace of vaccinations and corresponding decline in COVID cases and deaths, Trudeau called a snap election in August a full two years ahead of the next fixed election date. Trudeau’s Liberal Party only won a minority victory in the last election in October 2019, and he saw an opportunity to gain majority control of Parliament.

(Unlike in Australia, the Canadian Liberals are a left-wing party.)

“Trudeau would definitely not have called a snap election to check in with the people if the Liberals were in the majority,” Canadian political scientist David Moscrop says. “They figured they had a shot at a majority and the worst-case scenario was they would be returned with a minority.”

When Trudeau called the election in mid-August, the Liberals had a six-point lead over the Conservatives in the Canadian Broadcasting Corporation polling average. By the start of September there had been a dramatic turnaround: the Conservatives were now leading by three points.

Despite the country’s high vaccination rate, COVID cases were surging again: Canada is now recording an average of 4000 new cases a day, up from 1800 when Trudeau called the election. Trudeau was also criticised for failing to get enough Canadians and Afghan allies out of Kabul before the US withdrawal. And while voters were pleased with their nation’s vaccine success, they were grumpy about being forced back to the polls within two years.

“There was a backlash to him calling the election in the first place,” Moscrop says.

The election campaign has not been the easy victory march Trudeau surely imagined when he decided to go to the polls early. On the campaign trail Trudeau has been hounded by what he calls “anti-vaxxer mobs” – protesters angry at coronavirus vaccine mandates and other public health measures. Last week one protester threw gravel at Trudeau and was later charged with assault.

Then on Wednesday (Australian time) Trudeau shouted at a protester who had yelled derogatory remarks about his wife Gregoire. “Isn’t there a hospital you should be going to bother right now?” Trudeau fired back, a reference to anti-vaccine protests that have recently been held outside Canadian hospitals.

“I’ve a pretty thick skin and I am able to take all sorts of different abuse,” Trudeau said after the incident. “But he went after my family.”

Opposition to vaccines is a relatively fringe position in Canada, but the far-right People’s Party is trying to capitalise on this sentiment by campaigning against vaccine mandates and passports.

The People’s Party has doubled its support in the polls from 3 per cent to 7 per cent in recent weeks. That’s a worrying sign for the Conservatives given the parties are competing for the same right-leaning voters. The polls now show the Liberals and Conservatives essentially tied, with 34 and 33 per cent of the vote intentions respectively.

Trudeau also has another advantage: the Liberals’ votes are distributed much more efficiently than the Conservatives. In 2019, the Conservatives won 34 per cent of the vote and the Liberals 33 per cent but Trudeau’s party won 36 more seats thanks to its dominance in crucial suburban seats. The Liberals could quite possibly lose the popular vote again while retaining power.