When the final result for the upper house of our new parliament is revealed, Legalise Cannabis candidates may have won as many seats as the Greens, possibly one more. Dan Andrews should heed the message and get serious about drug law reform.

We could adopt a socially progressive and commercially sustainable model that also just happens to create an endless and substantial revenue stream for government. 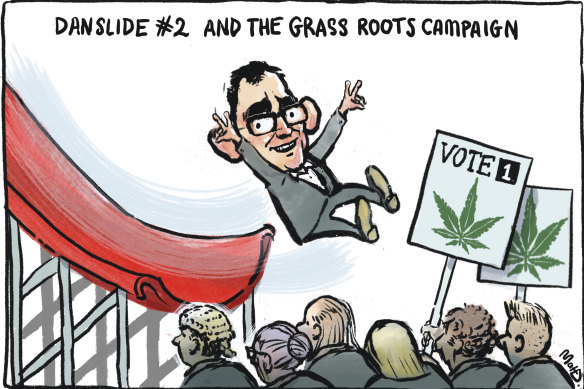 The Andrews’ government needs to get serious about drug reform.Credit:Illustration: Matt Davidson

For their third term, our all-conquering premier and his majority female ministry will be beholden to an eclectic bunch in the upper house. Contrary to most predictions – including mine – the crossbench will not comprise noisy right-wing “freedom” agitators, but instead noisy left-wing cannabis agitators.

The self-promotional prowess of the “preference whisperer”, Glenn Druery, bedazzled many of us in the commentariat and we failed to notice – or to sniff — the fragrant breeze wafting across Victoria.

It looks likely that the ALP and Coalition will each have 15 members, the Greens two or maybe three matched by two or maybe three Legalise Cannabis activists. The required 21 votes to get laws through may inspire Andrews to sit down and smoke a peace pipe, of course, to secure his legislative agenda.

For the remaining five seats, we are likely to see the Animal Justice, Shooters Fishers & Farmers and Transport Matters representatives returned. Astonishingly for left-leaning Victoria, a Pauline Hanson candidate will succeed, supported by the same Victorians who put Clive Palmer’s United Australia Party’s Ralph Babet into the Senate. The final spot will either be Fiona Patten from the Reason Party or disgraced former ALP minister Adem Somyurek, now with the DLP.

If elected, will Somyurek theatrically stand aside for expelled Liberal Bernie Finn to take their party’s spot instead? 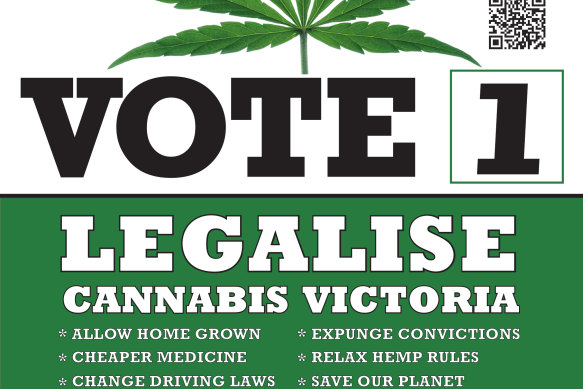 The Legalise Cannabis party will expect the government to consider its reforms in return for their support.

Support from Legalise Cannabis for the government’s agenda will depend on genuine drug law reform which could become the litmus test of Andrews’ progressive credentials. Will Victoria legalise marijuana?

Our state’s appetite for groundbreaking reform proves our preparedness to implement evidence-based change. Victoria’s track record goes back as far as compulsory seat belts but also embraces 0.05 per cent drink-driving laws, the Human Rights Charter, voluntary assisted dying, abortion reform and commitment to a First Nations treaty. It will not just be infrastructure that Andrews leaves as his legacy whenever he decides to step aside.

Health Minister Mary-Anne Thomas might have been too busy trying to fix hospital and ambulance crises to have noticed what is happening in New York. It has just announced inspiring and innovative solutions as the 15th American state to abandon the futile and counter-productive “war on drugs”. Our much-respected Penington Institute’s timely release of a report adds local momentum to a long overdue re-think.

New York state has adopted a social equity approach to licensing cannabis sales. It rejected the quick and easy fix of auctioning off cannabis licences to the large corporates as happened in California, Oregon and other jurisdictions a decade ago in the United States.

Instead, cannabis licences have been granted to social enterprises – a homeless shelter, for instance – as well as individuals who must have prior convictions for marijuana use. Yes, that is not a misprint. Must. The concept is that not-for-profit charities will channel the expected mega-profits back to the disadvantaged. The people with a criminal conviction will be licensed to run small local cannabis retail outlets selling everything from gummy bears, chocolates, oils, cake mix, liquids and any number of variations on smokables. Think local bistro instead of Maccas.

Drawing on the prior involvement in the drug culture of this group of people but bringing them out of the shadows of the black market turns them into small business operators and ends stigma, while removing welfare dependence and stopping a massive, unproductive drain on the resources of the state.

We are years behind. Our local weed entrepreneurs are betting big on a corporate approach. But there is a viable alternative.

Cannabis is big business right across Canada, the US and many European countries and a major source of revenue for their governments. Just in New York state alone, it is expected the legal sale of cannabis from licensed premises will displace the estimated $2 billion annual illicit trade and deliver $1.25 billion over six years to government coffers. The Office of Cannabis Management and the Cannabis Control Board have issued more than 280 pages of regulations covering everything from growing, selling and advertising in the expectation that a regulated, legal trade will minimise exploitation and misuse.

In enlightened cities and states, this health approach has long ago replaced our backward, failed, punitive law-and-order nonsense. If the Andrews third term government can somehow see its way to decoupling drug reform from the iron grip maintained in the past by both police command and the Police Association, then Victoria can introduce laws that save not just lives, but also billions of dollars a year while the power, influence and prosperity of drug-dealing outlaw motorcycle gangs are weakened.

What’s not to like about that? And no, I have hardly touched the stuff for about 40 years.