Home » World News » Will Sydney’s curfew work? What the world’s experts have said

As the NSW government grapples with record COVID-19 cases, Premier Gladys Bereijklian has agreed to implement curfews in hotspot LGAs.

It’s a significant shift in her position from only last month when she said: “I am not the type of Premier that is going to be asking citizens to do things we do not think are going to have any effect.” But on Friday the Premier acknowledged the “mixed” success of curfews overseas. 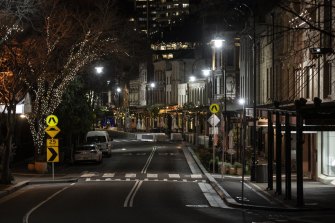 Experts are divided over whether a curfew could help drive down the COVID case numbers in Sydney. Credit:Wolter Peeters

Her previous resistance sparked a war between states, copping fire from Victorian Premier Daniel Andrews who last month had demanded a ring of steel around Sydney and argued a curfew was “worth trying”.

Both measures featured in his state’s lockdown last year which drove cases from over 700 to zero.

On Friday, Premier Berejiklian said: “While the evidence of curfews is mixed, the evidence to a lot of this thing is mixed. But I do not want us to have a look back and say we did not try, we did not put everything into this.”

NSW Chief Health Officer Kerry Chant agreed evidence is “mixed”, adding: “I also think that it sends a significant signal about the crisis we are facing.

“Health has supported the curfew and that is because we want to do everything we can… no-one wants to leave any stone unturned.”

A Herald analysis of international experience, published early this month, shows in certain circumstances curfews appear to have worked, particularly by curbing the illegal household gatherings which have proved a major factor in Sydney’s crisis.

However, the evidence has been far from straightforward as curfews have been adopted across south-east Asia, South America, the Middle East, Europe and individual US states.

In some countries they appear to have no effect, driving a rift between international experts asked to comment on Australia’s situation.

They all agree the problem in determining how effective curfews are is they usually form part of a bundle of restrictions, making it difficult to disentangle how effective each individual measure is.

Dr Donald Vinh from the McGill University Health Centre said curfews were an important measure that had “clearly” contributed to a reduction in cases in the Canadian province of Quebec.

He said curfews could curb nighttime social activities “that tend to be more close or intimate” between different households and reinforced the “need to remain vigilant” in the public psyche.

“There are no randomised controlled trials of curfew versus no curfew because pandemics do not occur sufficiently frequently enough, thank goodness,” Dr Vinh said.

He added that scientists instead had to rely on observational data where curfews had been used.

There was a prime opportunity to collect data over Christmas, when Canada’s two largest provinces were locked down. Quebec implemented a nighttime curfew and Ontario did not.

The curfew was associated with an “immediate, steep reduction in nighttime mobility” according to the research team from the University of Toronto and Public Health Ontario.

Nighttime mobility plunged 31 per cent more in Quebec than in Ontario, according to the preprint published in April.

Mobility has been strongly tied to growth in case numbers.

Curfews were ranked as one of the most effective government interventions in a study published in the journal of Nature Human Behaviour.

One of the authors, Professor Peter Klimek from the Medical University of Vienna in Austria, said the study found curfews reduced the case reproduction number by about 10 per cent on average.

The likely explanation was curfews reduced social contact in high risk settings, such as private gatherings in closed rooms, he said.

“If people in Australia are already exhausted and under mounting psycho-social pressure due to the containment measures in place, the effectiveness of an additional highly intrusive measure like a curfew can be expected to decrease,” he said.

A recent study on the German city of Hesse found no statistical evidence that night curfews were effective in slowing the spread of COVID-19.

One of the authors of the preprint, Professor George Gotz from Justus Liebig University, said the research team compared regions with almost identical restrictions, aside from the curfews.

“In terms of night curfews I would take from our research and other papers that the effect seems limited at best,” he said.

He said a French study in Toulouse had shown a curfew might have even increased infections because it led to additional congestion on public transport.

He said there was also the risk people could sidestep the curfew by staying at friends’ houses overnight.

“I would guess, and that’s perhaps a wild guess, that if the Australian problem is non-compliance with social distancing rules, it is perhaps not the best solution to have rather restrictive measures in place which can be circumvented rather easily and then might even deteriorate the problem.”

Professor Colin Furness, from the University of Toronto, said the evidence on curfews was complex but believed they could work under certain conditions.

They needed a predetermined end date, to be fair in terms of enforcement and “reasonable” in the public eye, he said.

“I had suggested a curfew in Ontario for the week between Christmas and New Years, where there was clearly a ton of illicit household visits,” he said.

“My suggestion was ignored, and we had a very sudden spike in cases about two weeks later.”

Professor Furness said it would be more effective to target essential workers and their workplaces with “aggressive testing”, than to lock down populations.

In response to questions about its position on curfews, a spokeswoman for NSW Health said they were “a decision for cabinet”.

Stay across the most crucial developments related to the pandemic with the Coronavirus Update. Sign up to receive the weekly newsletter.