Devoted mother, 73, has taken care of her adopted son who has cerebral palsy for 42 years after finding him abandoned on her doorstep as a baby

They say a family is not defined by blood, but the love that runs in it – like how this Chinese mother looks after her adopted sick son without a complaint.

Devoted Peng Lianqing has taken care of her seriously ill child wholeheartedly for 42 years since she found him abandoned on her doorstep at two weeks old.

Ms Peng, now 73, says it has been her pleasure to raise her only son, Chen Zhixiang, who has cerebral palsy and needs round-the-clock attention. 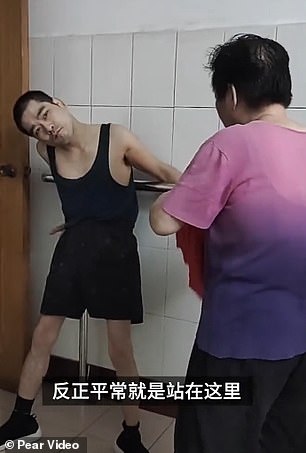 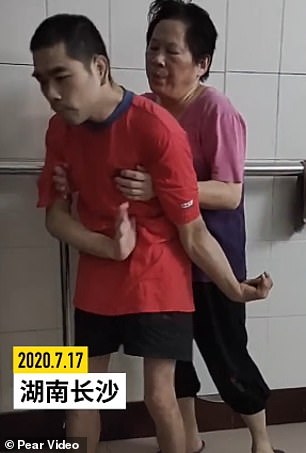 Ms Peng, a retired nurse from Changsha, came across her son in July 1978.

Recalling the fateful encounter to local reporters, Ms Peng said she was spending a day off at home when she heard a baby’s cries through the window.

When she opened the door, she saw a newborn boy lying outside her house. Next to him was a piece of paper that bore his date of birth.

Ms Peng, who was 31 at the time, took the child into her home without hesitation.

Ms Peng and her husband, who did not have a child of their own, decided to adopt the baby.

‘The arrival of the child brought much fun to our family,’ Ms Peng told Changsha Evening News. 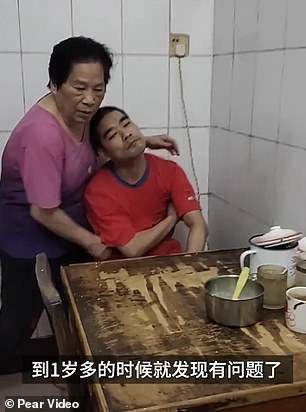 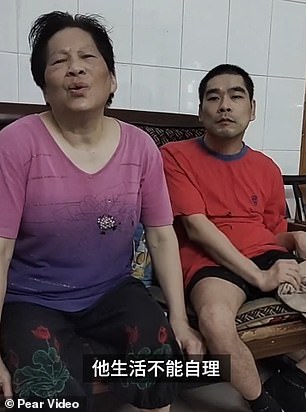 Ms Peng’s son, Chen Zhixiang, was diagnosed with cerebral palsy at two years old. She refused to take the boy to an orphanage – like what her husband had told her to – and took care of him

WHAT IS CEREBRAL PALSY?

Cerebral palsy is the umbrella term for a number of brain conditions that affect movement and coordination.

Specifically, it is caused by a problem in the parts of the brain responsible for controlling muscles.

The condition can occur if the brain develops abnormally or is damaged before, during or shortly after birth.

One in every 400 children in the UK are thought to be born with cerebral palsy, meaning around 1,800 children a year have the condition.

It’s estimated that 764,000 children and adults in the US have one or more symptoms of the disorder.

There’s no cure for cerebral palsy, but some treatments are available to ease symptoms, such as physiotherapy.

Life expectancy is usually unaffected, however, the emotional and physical strain can put a great deal of stress on the body which can cause further problems in later life.

But Ms Peng’s life faced a U-turn when her son was diagnosed with cerebral palsy as a toddler.

She had taken the boy to a hospital for checkups because he had not learned to walk at two.

Cerebral palsy is the umbrella term for several brain conditions that affect movement and coordination.

Specifically, it is caused by a problem in the parts of the brain responsible for controlling muscles.

Doctors told Ms Peng that her son might not be able to walk or talk for the rest of his life.

Her husband and mother-in-law told her to give the child to an orphanage, but she refused.

‘I thought he was a life too, and we had lived together for two years already. We all have emotions,’ Ms Peng told reporters.

In the years to follow, Ms Peng provided meticulous care for her son and took him to different cities to seek medical attention.

She named the boy Zhixiang, or ‘fly with ambition’, to wish him a bright future.

Years soon became decades. The mother helped her child put on clothes, eat, bathe, pass waste and exercise – day in day out without a complaint.

Over the years, Ms Peng’s husband became more and more distant from Ms Peng because she had insisted on keeping the boy.

Her husband died in 2011, which meant that Ms Peng would only be able to rely on her pension to look after Zhixiang.

But the mother has continued to give all her love to her son, who is now 42. 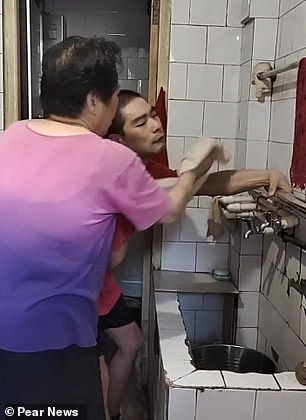 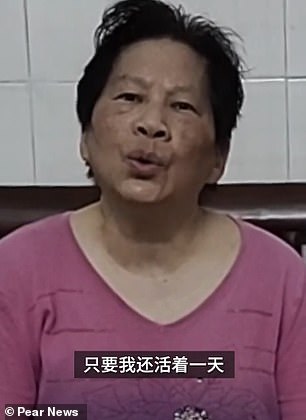 Ms Peng, now 73, says it has been her pleasure to raise her only son all these years despite the hardship and challenges. The devoted mother said: ‘As long as I am alive, I will care for him’

Local officials recently awarded Ms Peng the title of a ‘moral model’ after her selflessness and devotion had moved thousands in her city.

Her story has also been featured on Chinese state media, such as Xinhua.

‘I have experienced happiness and hardship all these years, but I have never regretted,’ she said at the award ceremony.

Speaking to the local press, Ms Peng expressed her love for Zhixiang: ‘As long as I am alive, I will care for him.’

Biden's decline may have severe consequences for US, world: GERAGHTY