A WOMAN was left stunned by a neighbour's letter asking her daughter to move her headboard after hearing "sexual noises" – despite her just having surgery.

She received the hilarious letter about the "delicate matter" claiming that the sex sounds were ringing out day after day, morning and night. 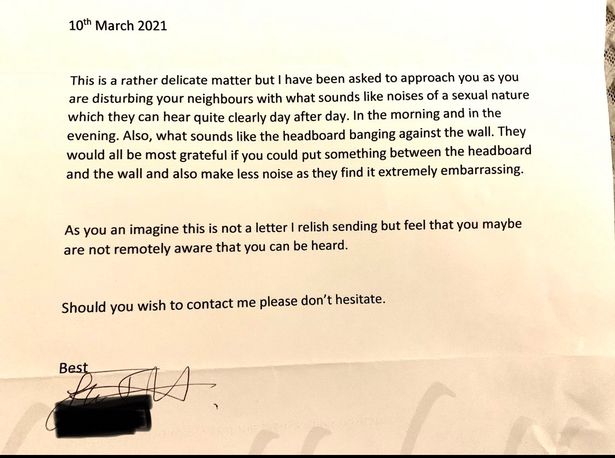 The mum posted the letter on Twitter, along with the comical caption: "My daughter got a complaint letter from her letting agents.

Covering her back, the user Delirious Dater then added: "To be honest there is no accuracy about the letter whatsoever!

"My daughter had back surgery 2 weeks ago and doesn’t have a headboard."

The full note from the letting agent on behalf of the neighbour said: "This is a rather delicate matter but I have been asked to approach you as you are disturbing your neighbours with what sounds like noises of a sexual nature which they can hear quite clearly day after day, in the morning and in the evening.

"Also, what sounds like the headboard banging against the wall.

BANG OUT OF ORDER

"They would all be most grateful if you could put something between the headboard and the wall and also make less noise as they find it extremely embarrassing.

"As you can imagine, this is not a letter I relish sending but feel that you maybe are not remotely aware that you can be heard.

"Should you wish to contact me, please don't hesitate."

People on social media were left in stitches after reading the hilarious letter.

One person wrote: "Definitely frame it, the poor agent must have felt so awkward lol."

Another added: "You can just imagine the various conversations that have gone on between the neighbours and the agent and then the people in the agency who had to write the letter!!"

And a third said: "I’d be inclined to ask why the letting agent felt taking the time and effort to type up this letter, as well as the cost for postage is really worth it?

"Would a call and being adult about it not suffice?

"I feel for your daughter and encourage her to complain!"

And some even shared their own experiences: "Mrs and I were in a hotel room in Budapest and the walls were so thin we could hear everything from next door.

"When they finished we gave them a round of applause and they actually said, 'Thank you.'"

Tewkesbury under water with 118 flood alerts and warnings in place