Woman is mauled by hippo after it ripped her cousin’s stomach apart leaving her ‘holding her own intestines’ at South African petting farm: Victim leaves one-star TripAdvisor review!

A woman has claimed she was ‘thrown around like a rag doll’ by an enraged hippo which also ‘ripped her cousin’s stomach apart’ at a South African petting farm.

Natasha Vrany, 39, from Alberton, alleged she and her cousin Belinda Newman, 62, were attacked by a hippo while visiting Jessica’s Place in Hoedspruit, Limpopo, on November 14.

The world-famous nature reserve, run by Tonie and Shirley Joubert, is home to two hippos – Jessica, 21, and nine-year-old Richie, who Ms Vrany alleges attacked her and her cousin.

The two hippos were rescued by the couple when they were young and have lived ‘like children’ in the house ever since, while visitors are able to feed Jessica and give her a backrub, according to the reserve’s website.

Ms Vrany told Independent Online (IOL) that she and her cousin were sitting on the Jouberts’ lawn when Richie ran out of a nearby river and attacked them, claiming he knocked her to the ground and ‘ripped’ Ms Newman’s stomach to ‘pieces’.

But owner Mr Joubert claimed Richie did not attack the two women, saying a wild hippo was responsible for the horrifying ordeal. There are wild hippos living in the nearby Blyde River. 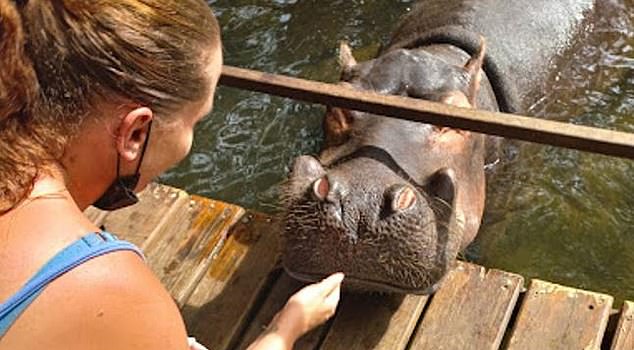 Natasha Vrany (pictured petting one of the hippos), 39, from Alberton, alleged she and her cousin Belinda Newman, 62, were attacked by hippo Richie while visiting Jessica’s Place in Hoedspruit, Limpopo, on November 14

Mr Joubert also claimed the incident did not happen on his premises and said he put his own life at risk trying to safe the two women from the wild animal.

Ms Vrany said she has undergone two operations since the attack, while her cousin Ms Newman, who has known the Joubert couple for more than 20 years, has also had surgery.

Ms Vrany left Jessica’s Place a one-star review on TripAdvisor following the incident, where she detailed what happened in the alleged attack and urged others not to attend the nature reserve.

Speaking to IOL about the attack, Ms Vrany claimed Richie charged out of the river and pushed her to the ground, saying she tried to put her nails in his left eye to stop the attack.

She said: ‘As I got on my feet, Richie pushed me down to the ground and proceeded to bite both my legs and throw me around like a rag doll. He had both legs in his mouth, biting harder with every second.’

Ms Vrany alleged that Richie carried her towards the river as she screamed for help, while Mr Joubert, who did not have a weapon at the time, was slapping the animal.

She claimed her cousin jumped on the hippo’s back in a bid to get him to release her, but added that the animal turned on Ms Newman after letting her go.

She added: ‘He then turned on Belinda, pushing her to the ground, and started ripping her stomach to pieces.’

Although she was injured, she claimed she ran to the house to ask Ms Joubert to bring a rifle outside, but said she passed out when she reached the kitchen.

Ms Vrany claimed that when she woke up, Ms Newman was standing over her ‘holding her intestines in her hand to try and get them to stay inside’.

While they were waiting for an ambulance, she claimed Mr Joubert brought Jessica, the world-famous hippo who also lives on the nature reserve, to ‘put her to bed’ on the veranda.

Ms Vrany claimed she thought she was going to die after the attack and said she and her cousin were rushed to a nearby after the incident, where they were operated on.

She added: ‘It was the most traumatic experience of my entire life, and I still have nightmares.’

But Mr Joubert has instead claimed the incident took place outside of his premises, and said he hit the animal with a heavy rock after he saw it grab hold of Ms Vrany.

He said: ‘I managed to hit him above the eye, where there is soft bone, and he dropped her, I saved her life while putting my own life at risk.’

Mr Joubert said the wild animal disappeared back into the water after the attack, while he claimed he ran back to the house to get help.

He claimed Jessica was already sleeping on the veranda when he reached the house, while Richie was also at the home. He insisted his animals were not involved in the incident.

He added that there are a lot of wild hippos who live in the same area and further along the Blyde River.

Mr and Ms Joubert rescued the now world-famous Jessica as a baby in March 2000 after devastating floods left her orphaned and alone on the banks of the Blyde River.

Park ranger Mr Joubert brought Jessica home to his wife, where they hand reared her and the animal has lived ever since.

Jessica, who weighs more than 1500kg, lives freely on the nature reserve and is allowed inside the couple’s kitchen, as she lives like their ‘daughter’.

In 2012, after a heavy storm and a flash flood, Richie, who was only a few hours old at the time, was found by Mr Joubert and after they were unable to find his mother, he took the tiny hippo back to the nature reserve to join Jessica.

Since they rescued her, Jessica has become world famous, having appeared on BBC News, in South African movie Mr. Bones and on an Animal Planet documentary named after her.

She also made a guest appearance in first season of I’m a Celebrity… Get Me Out Of Here! Australia in 2015, helping Chrissie Swan and Maureen McCormick win a box of chocolate.