‘Tis but a scratch, officer! Woman whose BMW was mangled in motorway smash was stopped by stunned police… after she decided it was SAFE to drive wreck 20 miles home

A woman whose BMW was wrecked in motorway pile-up was stopped by stunned police, after she decided the car was safe to drive 20 miles home.

Merseyside Police admitted their experienced officers were ‘lost for words’ when they saw what was left of the of a white BMW trundling down one of Liverpool’s busiest dual carriageways on Monday night.

When they stopped the woman driver on the city’s busy Queens Drive, she explained how she had earlier been involved in a road traffic accident on the M6 motorway, over 20 miles away.

The car’s bonnet was left heavily crumpled and obstructing the view of the windshield, while the front end appears to be partially detached. 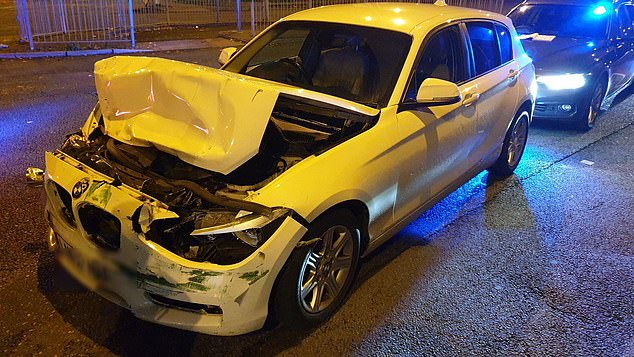 But despite the state of her car she said she ‘decided it was safe’ and carried on making her way home into Liverpool city centre.

Posting an image of the twisted wreckage of the car, the force’s Road Policing Unit said she was stopped, the vehicle was recovered and banned immediately from the road – and she has been reported.

They tweeted: ‘We were lost for words when we saw this being driven along Queens Drive!

‘The driver had been in an RTC on the M6 and decided it was safe for her to continue her journey into Liverpool. She has been reported and the vehicle was recovered and prohibited.’