Two women who were allegedly kidnapped, gagged and bound by their relatives after they fled an environment of extreme religious and cultural control used Snapchat’s location feature to alert authorities to their whereabouts as they were transported from Victoria to NSW.

A court heard the young women, who cannot be named to protect their safety, had been stalked by their cousin for three days before relatives broke into their Melbourne home, tied them up with rope and duct tape and drove them back to Sydney. 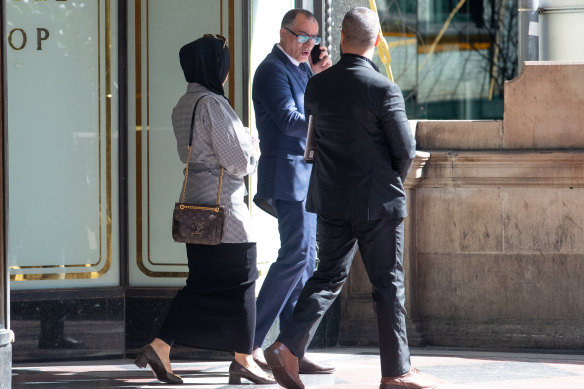 A lawyer for and supporters of the accused outside a Sydney court after the extradition hearing.Credit:Edwina Pickles

The pair had fled their home in NSW with the help of the police in March after enduring what an officer described as years of violence and “extreme control due to strict religious and cultural beliefs” at the hands of their relatives.

A woman and three men were arrested and extradited to Victoria last week following the alleged kidnapping, which began in Melbourne’s northern suburbs and ended in western Sydney with police intercepting a car and freeing the women.

A 51-year-old man, a 48-year-old woman, a 21-year-old man and a 33-year-old man, whose identities cannot be revealed to protect the women, faced Melbourne Magistrates’ Court on Thursday morning charged with kidnapping and assault.

Police allege that on August 27, a cousin of both women drove from Sydney to Melbourne and checked into the Novotel hotel in Preston, where he waited for the mother and brother of one of the women to fly in from interstate.

Three days later, on August 30, the trio broke into the women’s home and waited for them to return from work. They armed themselves with two knives they found in the kitchen and put on blue plastic gloves they found under the sink.

The trio had also packed duct tape and rope for the kidnapping, the court heard.

As the women returned home later that evening, the cousin grabbed one of them from behind, covered her mouth and held a knife to her neck.

Another relative grabbed the other woman by the hair, pulled her to the ground and held the other knife to her stomach, allegedly telling her: “You bitch, you think you can run away from home? I have a knife in my hand. Don’t move, don’t scream.”

At one point during the ordeal, the cousin allegedly ripped a gold cross necklace from around the neck of one of the women, who had converted from Islam to Christianity.

The women were then bound, gagged, forced into the back of a car and driven back to Sydney, their wrists and mouths concealed by coats and face masks. Meanwhile, the father of one of the women drove a truck to Victoria and cleared the home of their belongings.

The pair were eventually untied and one of the women managed to grab her phone and use Snapchat’s location pin to alert her boyfriend, who called the police.

Prosecutor Philip Teo said the kidnapping had been thoroughly planned and required “significant effort to orchestrate”.

The court heard the women, who are cousins, had tried to escape their family last March but had been discovered within hours and talked into returning home.

Teo argued the four family members had a history of tracking down the women and posed a risk if released on bail.

Detective Senior Constable Ardi Yavari, who is the informant in the case, said investigators were also concerned about relatives trying to coerce the alleged victims into withdrawing their statements.

The court heard the women had already been contacted by an unknown phone number suspected to be linked to a family friend or relative, pressuring them to withdraw the charges.

“I, myself, am fearful for their lives,” Yavari told the court.

However, the lawyer representing the alleged kidnappers, Rishi Nathwani, argued intervention orders currently in place to protect the women, as well as additional bail conditions, would mitigate the risk.

Magistrate Carolyn Burnside said both women had been subjected to “a very high level of threatening and humiliating behaviour” from their relatives.

“It’s all about shaming the family,” she said.

She refrained from deciding on whether to grant bail to the four co-accused on Thursday, deferring the decision until later this month.

“I need to look at the risk factors here very carefully because there are two young women who are involved in this matter said to have been victims of high levels of aggression,” she said.

The Morning Edition newsletter is our guide to the day’s most important and interesting stories, analysis and insights. Sign up here

Amazon just dropped the price on this best-selling Ninja blender that has more than 26,000 5-star reviews