Revealed: Women’s rights activist who flashed in Scottish Parliament in protest over SNP’s trans bill is comedian and ‘pelvic physiotherapist’

The women’s rights activist who flashed in Scottish Parliament in protest over the SNP’s gender recognition reform bill has been revealed as pelvic physiotherapist and comedian Elaine Miller.

After the Bill was passed a women’s rights activist, named as Ms Miller, stood up in Scottish Parliament and shouted: ‘If this parliament will not respect the rights of women then you have no decency. 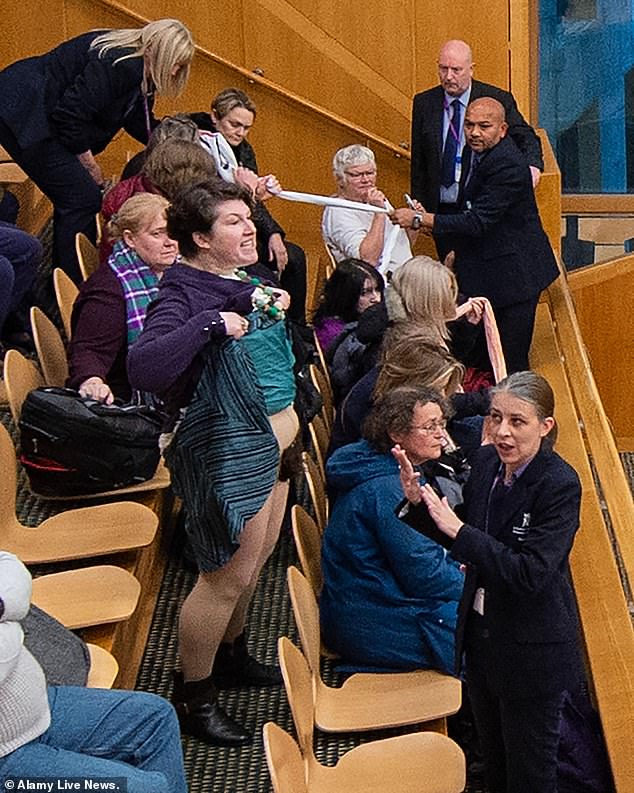 The women’s rights activist who flashed in Scottish Parliament in protest over the SNP’s gender recognition reform bill has been revealed as Elaine Miller, an Edinburgh-based pelvic physiotherapist and comedian 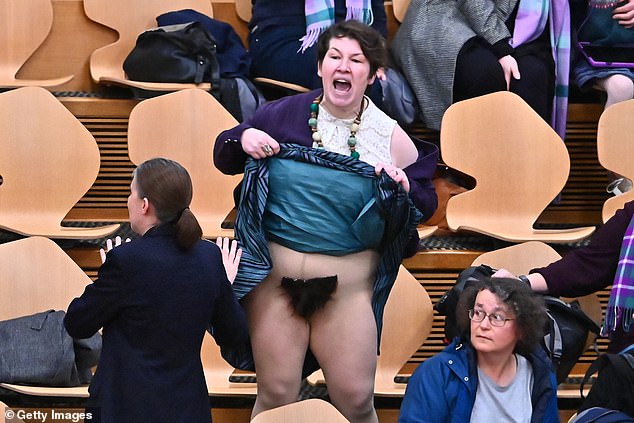 After the Bill was passed, Miller shouted from the public gallery: ‘If this parliament will not respect the rights of women then you have no decency’ 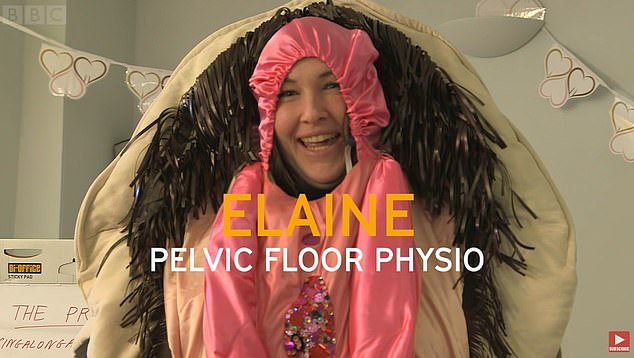 Elaine Miller is an Edinburgh-based pelvic physiotherapist and comedian, combining her hobby of stand up with work to run the comedy show under the stage name ‘Gusset Grippers’

She then lifted up her skirt to reveal a wig, adding: ‘If you think that’s the first time there will be a minge out you’re wrong’.

Ms Miller is an Edinburgh-based pelvic physiotherapist and comedian, combining her hobby of stand up with work to run the comedy show under the stage name ‘Gusset Grippers’ .

What is the Gender Recognition Reform (Scotland) Bill?

The Gender Recognition Reform (Scotland) Bill will make it easier for trans people to obtain a gender recognition certificate (GRC), which is legal recognition of their acquired gender.

It will introduce a system of self-declaration for obtaining a GRC and remove the need for a medical diagnosis of gender dysphoria.

It will also lower the minimum age for applicants from 18 to 16 and drop the time required for an applicant to live in their acquired gender from two years to three months, although with a subsequent, three-month reflection period.

While it was debated by MSPs in the Scottish Parliament, changes were made to the legislation to mean 16 and 17-year-olds will have to live in their acquired gender for six months rather than three before applying for a GRC.

There will also be a new statutory aggravation to the offence of making a fraudulent application for a GRC.

‘The aim of the show is that the audience leave knowing what a pelvic floor is, what it does and where to take theirs if they think it is a bit broken.

‘It is evidence based, and so counts as CPD – possibly the funniest thing about it,’ her website says.

Focusing on female anatomy, the show – which promises to be ‘frank, factual and funny’ and features a 5’4” singing vulva – has played at the Edinburgh Fringe, winning five-star reviews.

Ms Miller debuted at World Fringe in Perth, where she won the prestigious Comedy Award, before sell-out shows in Melbourne and at Adelaide Fringe.

But in August this year, The Times reported that a male worker at the Fringe venue where the show was being performed challenged women attending as he believed it to be ‘transphobic’.

The staff member is said to have tried to dissuade the audience from attending the performance, saying it showed ‘blatant misogyny’.

During this year’s Fringe, Ms Miller reported being harassed in the street on three occasions, telling the publication: ‘My show is not transphobic and neither am I.’

Ms Miller promotes pelvic health with comedy using the hashtag #LaughDontLeak and has spoken on the topic around the world including Australia, New Zealand, Canada Ireland and all over the UK.

She has collaborated with Monash University in Melborne, Australia to explore humour can be used as a health promotion tool.

Ms Miller said her aim is to ‘burst the taboo that surrounds incontinence which affects 1:3 women, 1:9 men, and yet, 70-80 per cent of them can be cured with pelvic floor exercises and physiotherapy.’

She also speaks on podcasts as well as TV breakfast shows on radio where she joked that during a slot on BBC Radio 4’s Woman’s Hour she ‘learned that ‘saying “bumhole” to Dame Jenni Murray is almost treason’.

Her reach from social media, radio, podcasts and TV means that over 590 million people have heard her message of #LaughDontLeak, according to her website.

This, she says, is just one of the reasons she was awarded a Fellowship by the Chartered Society of Physiotherapy.

Ms Miller said she decided to specialise in pelvic heath after ‘having three giant-headed babies in four years.’ 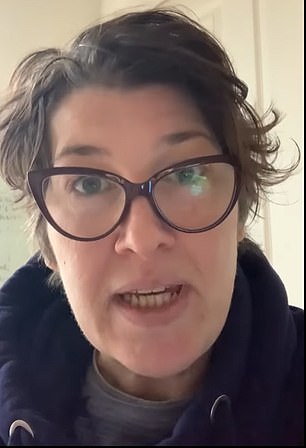 ‘I quite quickly became fascinated by the science of continence and the wonders of the pelvic floor after my babies were born,’ she says on her website.

Speaking to the Spectator earlier this year, the mother-of-three said she has been subjected to abuse including being ‘spat at on the street’ and had her comedy show posters defaced.

She told the publication: ‘I am a mother and I have dealt with toddlers and teenagers, and this is very familiar. It is intolerant, bad behaviour.’

The health professional has also reported being shunned by fellow comedians and staff, some of whom she has worked side-by-side with for years.

She told the Scottish Daily Express: ‘It’s the strangest thing for grown… adults. I go into a room and they turn their back on me.

‘This is not appropriate behaviour from an adult.’ 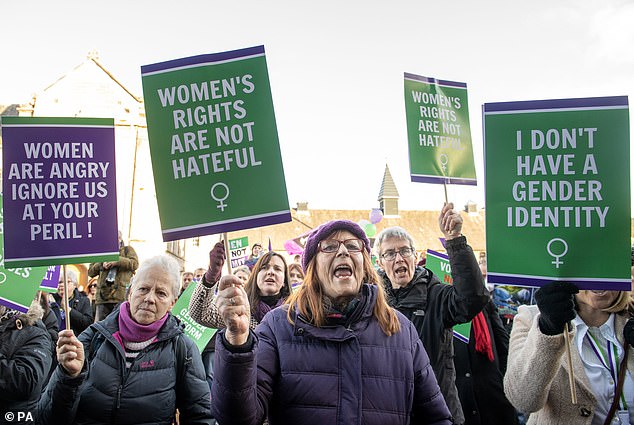 Pictured, protestors outside the Scottish Parliament in Edinburgh

Yesterday’s stunt was not the first time Ms Miller has heckled politicians over the Gender Recognition Bill.

Ms Rowling said Miller ‘spoke for women the length and breadth of Scotland’ when she stood up in the public gallery at a ​Holyrood committee hearing on Tuesday to accuse Shona Robison of failing to address women’s concerns.

Ms Miller said she had witnessed a ‘rude’ Ms Robison ‘draw squares around her notes’ rather than engage with women’s valid concerns about the impact of gender reform.

She left the hearing after her verbal attack on the minister.