The world’s oldest captive white rhino has died at a French zoo at the age of 55.

Sana, who was born in South Africa in 1964, was transported to Europe at the age of seven.

She lived in several parks in Germany before arriving at Planete Sauvage, a zoo in Nantes, France, in 1993.

The life expectancy of white rhinos in the wild is about 50 years, according to the Save the Rhino advocacy group.

Sana required special care in her later years and died on Tuesday, the park said in a statement. 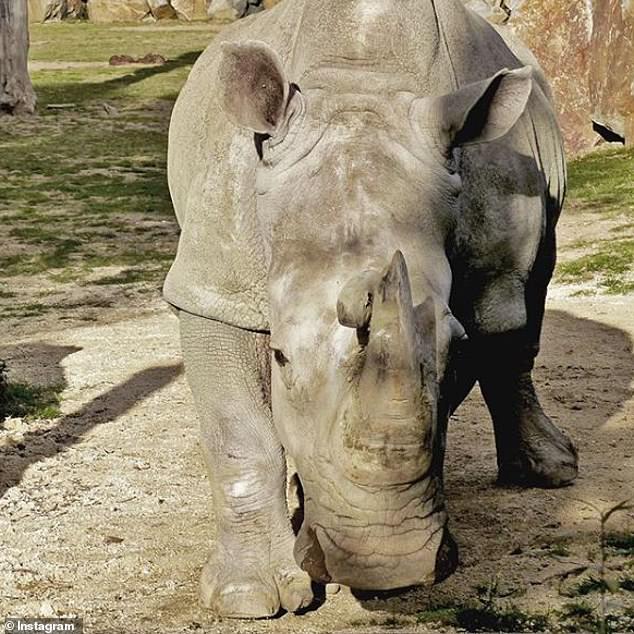 Sana (pictured in an Instagram snap), the world’s oldest white rhino kept in captivity has died at a French zoo at the age of 55

It read: ‘The Planete Sauvage team regret to announce the death of Sana, the doyenne of white rhinos, on Tuesday, November 12 at the exceptional age of 55 (world record for the oldest captive rhino).

‘Born in 1964 at the Umfolozi National Park in South Africa, Sana arrived in Europe in 1971. She spent several years at different parks in Germany before arriving at Planete Sauvage on October 27 1993, one year after we opened.’

Notably, she was no longer able to roll in the mud, a popular and crucial pastime that helps rhinos regulate their body temperature, prevent sunburn and ward off pesky insects.

‘Once a week, they coated her in green clay to help her skin stay hydrated and to stave off infections,’ the park said.

It added that Sana ‘always had a strong character, she was the one who set the rules.’

Her death has ‘deeply affected’ her caretakers, the zoo said. 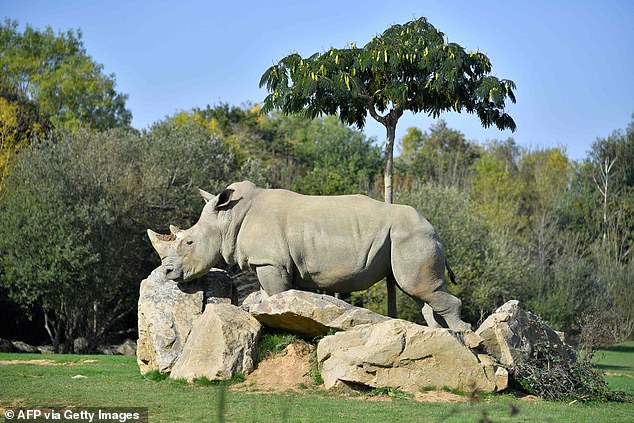 She (pictured in 2017) lived in several parks in Germany before arriving at Planete Sauvage, a zoo in Nantes, France, in 1993

The square-lipped grazers, larger than their black cousins, are divided into southern and northern subspecies.

In September, conservationists created two northern white rhino embryos from the two last females and sperm from deceased males, to one day implant into a surrogate mother in the hope of reviving the line.

Save the Rhino says around 20,000 southern white rhinos – Sana’s tribe – are left in the world.

Black rhinos, however, are considered critically endangered, with only about 5,000 left.

Rhino horn is a much sought-after ingredient in Asian traditional medicine.