A hungry passenger who wanted to eat a banana on a subway in Wuhan covered herself in a giant plastic bag so she would avoid bending Covid rules.

The woman was seen eating the banana before putting the peel into another small plastic bag that she had bought with her.

Footage of the unusual incident was taken by another passenger called Wang.

He was bemused and wondered at first if the woman was dressed up in a Halloween costume.

But it then dawned on him that although it was around the same time, people are currently not allowed to take off masks to eat on public transport due to COVID rules. 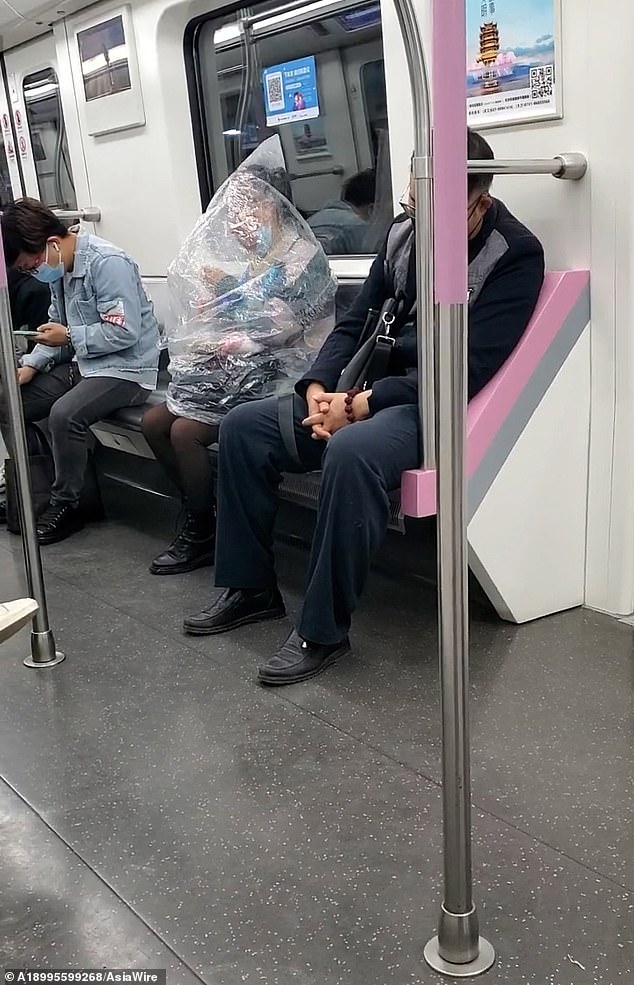 The woman covered up with a plastic bag on the subway in Wuhan, currently subject to Covid restrictions

Speaking about the video he said: ‘There are restrictions because of coronavirus outbreaks, but nevertheless even during an outbreak it seemed a bit extreme for the woman to go to this length to have a snack.’

He added that it was clear what the motivation was, because it would have been otherwise impossible to eat inside the subway train with a face mask in place.

Wang said: ‘She managed to keep herself separate from others by simply putting the plastic bag over her head.’

He thought it was strange and shared the video he took online but other passengers seemed unmoved by the plastic bag.

Two men next to her were on their phones while a man on the other side of them looked like he was taking a nap.

After the video went viral, a spokesman for the city’s Metro said: ‘We would like to remind people that eating on trains in Wuhan like in other Chinese cities is not allowed.

‘We urge anybody who spots something like this to call our hotline and staff will attend to the matter.’