Home » World News » ‘You are not a cow’: Warning over use of livestock anti-worm drug in the US

The US Food and Drug Administration has issued a strong and unusual warning: “You are not a horse. You are not a cow. Seriously, y’all. Stop it.”

On Friday, Mississippi’s health department issued a warning that more than 70 per cent of recent calls to the state’s poison centre came after people took ivermectin bought at livestock supply centres.

The FDA was reacting to alarms from Mississippi, the state with the worst outbreak in the US, that people have been taking ivermectin to treat or prevent COVID-19. The drug is often used against parasites in livestock. Thomas Dobbs, the state health officer, said earlier this week he knew of only one hospitalisation but was hearing reports of people taking the drug “as a preventative”. 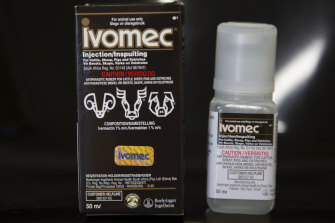 Some people are taking veterinary ivermectin (a South African brand is pictured) to treat COVID-19 even though there’s no evidence that it works or is safe. Credit:AP

“Which I think is really kind of crazy, so please don’t do that,” he said at a news briefing. The health department warning said 85 per cent of callers had mild symptoms but that one person was “was instructed to seek further evaluation due to the amount of ivermectin reportedly ingested”.

Amid earlier reports of the drug’s use, the National Institutes of Health said most studies on ivermectin’s use against COVID-19 had “significant limitations” and said there was insufficient evidence to recommend either for or against the drug’s use in the pandemic.

An FDA warning said that ivermectin “is not an anti-viral” and that “taking large doses of this drug is dangerous and can cause serious harm.” Although most often used in animals, the FDA said the drug has been approved in smaller doses in humans to treat two conditions caused by parasitic worms.

Mississippi has the nation’s highest per capita outbreak and its lowest rate of vaccination. Although the pace of vaccination has picked up recently in Mississippi, 45.1 per cent of people have received at least one dose compared with the national average of 60.5 per cent, according to the Bloomberg Vaccine Tracker.