For nearly two decades Ken Block wowed fans with his exhilarating tricks and dangerous stunts making him an internet sensation as well as a professional rally car driver.

The American motorsport legend died at the age of 55 on Monday after a snowmobile accident in Utah. Block was riding with a group but was on his own at the time of the accident.

Block died when his snowmobile overturned and landed on top of him. Following the injuries he sustained, Block was pronounced dead at the scene.

The action sports star first made a name for himself as a rally driver in 2005 as part of the Vermont SportsCar team driving a Subaru WRX STi. At the end of his first season he was awarded the Rally Car Rookie of the Year Award after finishing third overall.

Block then spent several years competing in various rally car events in North America and across the world, including the X Games and the World Rally Championship, where he achieved numerous podium finishes.

But it was only after Block filmed his YouTube show Gymkhana 2 in 2009 that the rally car driver was propelled into internet stardom. He quickly grew a loyal group of committed fans who became enthralled by his escapades.

Appearances on British motoring show Top Gear 2009, where he took presenter James May rallying across an airfield, increased the daredevils profile.

In addition to his success as a rally car driver, Block was a lover of all action sports and competed in motocross, skateboarding, driving UTVs, competitive snowboarding, and snowmobiling. He incorporated this into his online platform, amassing over eight million followers on his Instagram and two million subscribers to his YouTube channel.

MailOnline takes a look back at some of Ken Block’s most explosive and dangerous stunts across his exhilarating career. 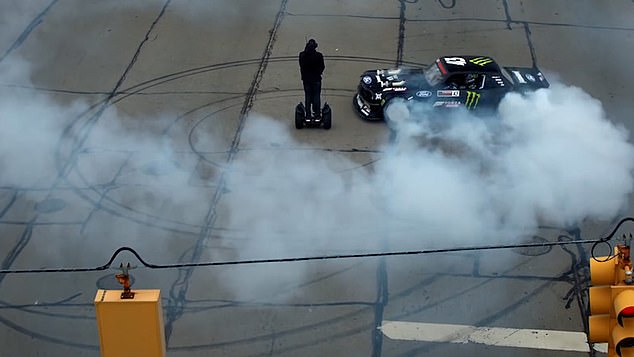 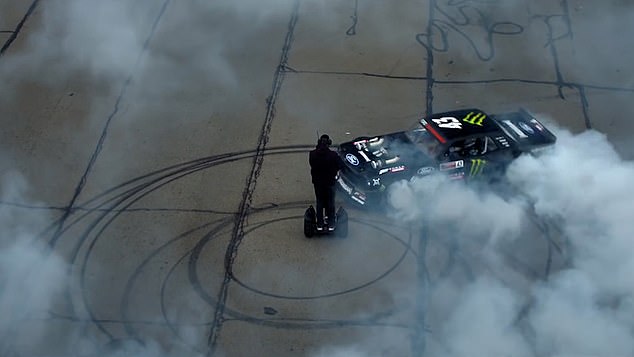 In 2018, as part of his Ultimate Tyre Sliding Tour, Block took his incredible skills to Detroit, Michigan. In his Hoonigan Gymkhana 10 Ford Hoonicorn Mustang, with its 6.7L Twin-Turbocharged V8 engine with 1400 horsepower, the rally-pro took his professional experience to Detroit’s urban environment. In a mesmerising series of stunts, he drifted his way around a man on a segway. In inch perfect precision, the motorsport legend circled his way around the segway driver who stayed deadly still. 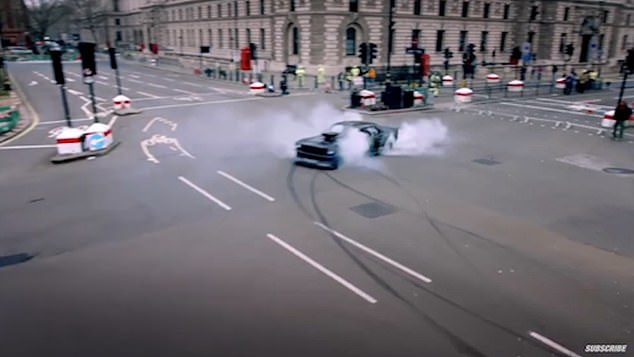 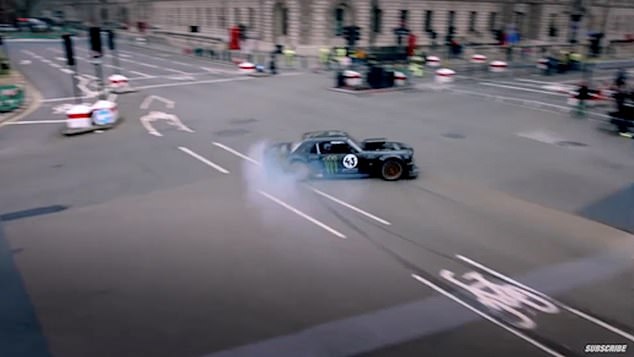 After increasing his profile with Top Gear’s James May as a passenger back in 2009, Block invited new presenter Matt LeBlanc on a tour of London with him in 2016. In the black Hoonicorn Mustang, modified from the 1965 Ford Mustang, Block showed Le Blanc how to drift through the streets of London. The car had a pre-tuned 6.7L Twin-Turbocharged V8 engine with 1,400 horsepower and all-wheel drive six-speed transition. Block drove the car to incredible speeds before flinging it around u-turns. The rally-pro showed the host how to drift as they left black tire marks across London’s roads. Block performed a series of donuts in front of famous London landmarks and completed a series of jumps that left sparks flying. 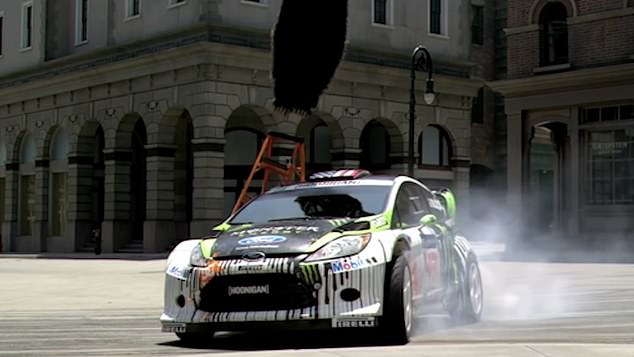 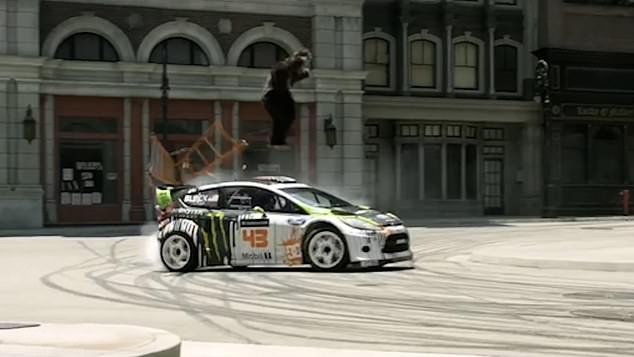 In 2011, Block combined his stunt driving with ‘Hollywood caliber production’ at Universal Studios, California to present his show Gymkhana FOUR: The Hollywood Megamercial. Block flung around his Hybrid FunctionHoon Vehicle, a modified Ford Focus, in his classic style. He was joined by pyrotechnics as he performed his usual spectacular tricks. Block drifted his way in and out of film sets fit with zombies and a robotic shark. At one point, Block shot is way through a group of fork-lift drives with his usual precision accuracy, before crashing his way through a wall to complete the Hollywood stunt. Most spectacular was Block knocking over a ladder that left a man in a gorilla suit falling to the ground. As he whipped round at speed, Block screeched to a halt to be joined by Bollywood dancers for a movie-style close. 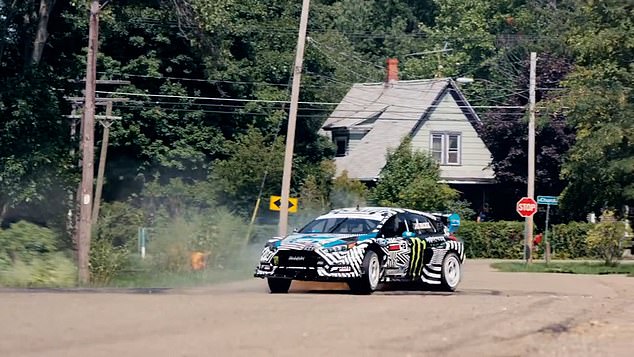 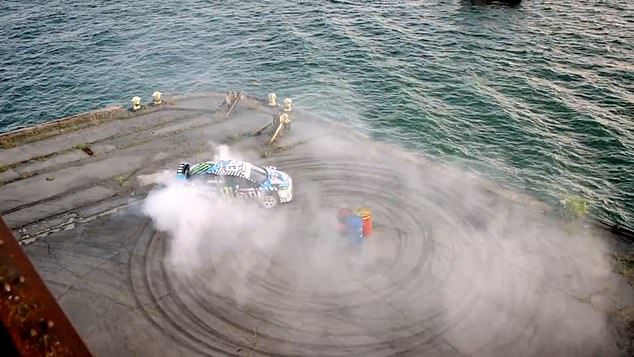 In 2016, Block showed off his ‘raw driving action’ through urban western New York. Block weaved his way through the industrial setting in his Hoonigan Gymkhana 9 Ford Focus RS RX. The RS RX is a typical rally car and has a two litre turbocharged inline-four engine with 600 horsepower and a a six-speed manual transmission driving all four wheels. He competed with the same car in the 2016 FIA World Rallycross Championship. The stunt was filmed over the course of four days and has amassed a staggering 54 million views. Block launched his car though industrial backroads. Block circles around an oil can, almost pushing his back wheel off the edge of a barge and into a river before weaving round a in-flight helicopter that’s lifting a pick-up truck. 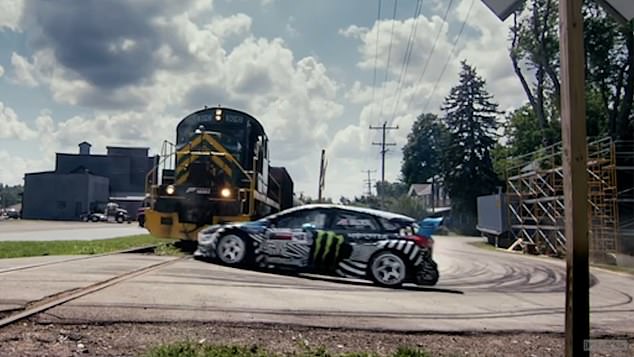 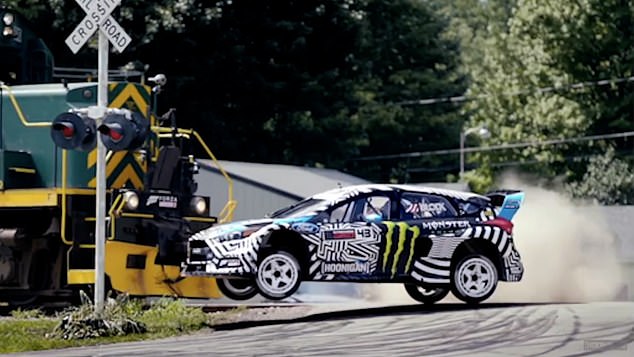 In the same series of stunts for his 2016 video, Block flung his car in front of a moving train, missing contact by some inches. In the Hoonigan Gymkhana 9 Ford Focus RS RX, the internet sensation screeches his car round the tight courter at pace as the cargo train pulled itself along the track in western New York. The Ford Focus RS RX scooted over the track and into the air. The car came incredibly close to making contact with the train, but Block showed his impeccable skills again to land the car unharmed. 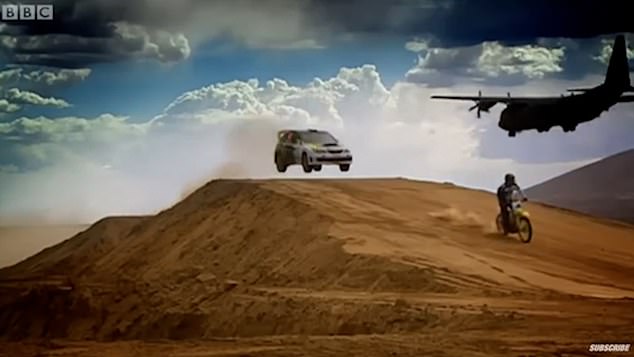 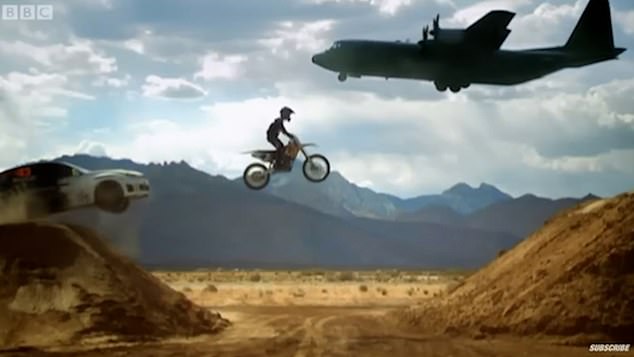 The motorsport legend showed off his Subaru-sliding skills to Top Gear’s James May in 2009. Block provided a breathtaking airfield rallying display in the specially strengthened 380 horsepower Suburu Impreza rally car. Slaloming around a series of airplanes, the rally legend then whisked his way through a tight airfield hanger door, leaving his passenger terrified by the daredevil antics. Fellow motorsport star and dirt-biking champion Ricky Carmichael then joined them with the car and bike weaving their way through one another. Block then finished off the series of stunts by launching his car across a 40ft jump some 12 of so feet from ground, landing swiftly back to the ground.

New Year blitz of snow to wreak havoc on UK

Who is Rebecca Long-Bailey and why has she been sacked? – The Sun