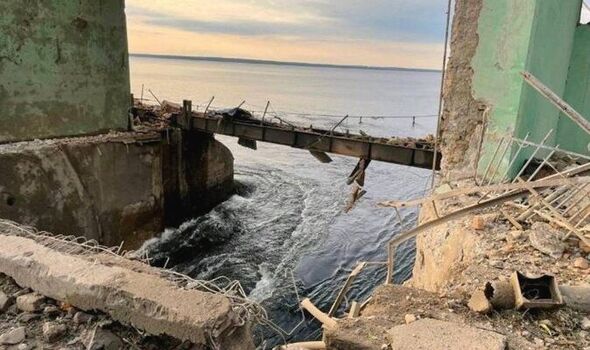 The targeted attack on the Karachunivske reservoir near Kryvyi Rih in the south – where the president grew up – left homes flooded and residents having to evacuate. When informed of the destruction, a furious Mr Zelensky made a televised address, telling the Kremlin: “You are weaklings who fight civilians.”

And in an apparent reference to Ukraine’s recent military successes in a swift counter-offensive in the country’s north-eastern Kharkiv region, he added: “Scoundrels who, having escaped from the battlefield, are trying to do harm from somewhere far away.”

In an impassioned speech, Mr Zelensky said the reservoir had “no military value at all”, alluding to it being an act of revenge by Moscow for Ukrainian gains.

In Kryvyi Rih itself, residents in some areas were told to get out. City mayor Oleksandr Vilkul on Thursday said the situation was now under control.

He added that two overnight blasts were carried out to increase water flow from the dam to the Inhulets river.

Water supplies have been affected in the city, which had a pre-war population of more than 600,000.

Officials said the river broke through the dam and its banks overflowed, flooding some homes.

Mr Vilkul said on Thursday morning water levels in the river had now “dropped considerably”. He added that there were no casualties.

Moscow has not publicly commented on the reported missile strikes.

The destruction of vital civilian infrastructure appears to be a growing tactic of the Kremlin as its forces struggle on the battlefield.

Earlier this week, Mr Zelensky claimed his troops had retaken more than 2,317 sq miles previously under Kremlin control in the north-east and the south in September. He said Russian forces had retreated, adding: “The movement of our troops continues.

“From the ­beginning of September until today, our warriors have already ­liberated more than 6,000 sq km of the territory of Ukraine.”

Mr Zelensky visited the recently recaptured city of Izyum, a key logistics hub in the Kharkiv region, on Wednesday. He thanked troops who took part in the counteroffensive and pledged Ukraine’s flag would fly over every city and village in the country.

But he also warned that the Russian aggressors would not be forgiven for the atrocities they have committed. Meanwhile, the Ukrainian counteroffensive continues to gather pace.

Troops have gained more ground, although some cities such as Mykolaiv in the south, are still suffering under the onslaught of shelling.

Amid growing disquiet in Moscow over Russia’s performance on the
battlefield, Ukrainian soldiers have now forced their way into the occupied Donbas.

It comes as Kremlin commanders – low on equipment and supplies – continue to beat a hasty retreat.

However, Russia’s Foreign Ministry on Thursday warned the US, it would cross a “red line” and become “a party to the conflict” if it supplies Kyiv with longer-range missiles.

Kremlin Foreign Ministry spokeswoman Maria Zakharova added that Russia “reserves the right to defend its territory”. Washington has already supplied Ukraine with advanced
rockets that can hit ­targets up to 50 miles away.

It has so far held back from saying whether it will send rockets with a capacity of more than double that range. US officials insist Ukraine has promised not to use its missiles to strike Russian territory.

Ms Zakharova stated: “If Washington does decide to supply longer-range missiles to Kyiv, then it will be crossing a red line.”

Yemen peace talks 'to resume next week' after long delay

Body of 15-year-old girl was found after drinking, inquest hears