Washington: Wolves could play a crucial role in combating a "zombie" disease which is threatening America's deer populations and could one day spread to humans, research suggests.

Chronic wasting disease is a fatal illness similar to mad cow disease and cases have been reported in deer and elk in at least 24 American states. 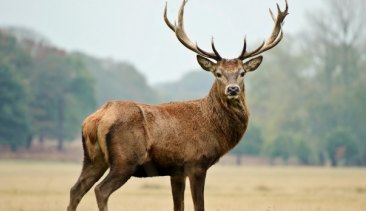 It has been nicknamed the "zombie disease" because it makes deer drastically lose weight, struggle to walk and become more aggressive and less afraid of human contact. An outbreak of the infectious disease is extremely difficult to contain and there is no treatment.

But a research project in Yellowstone National Park suggests that wolf packs may hold the key to keeping the disease out of the area by identifying and killing off sick animals.

The disease has already infected deer herds south of the park in Wyoming and to its north in Montana, posing a threat to the park's vast herds of elk and deer. The US Centres for Disease Control and Prevention has raised concerns that the disease may also pose a risk to humans who hunt and eat infected deer or elk.

A deer can be infected for 18 months without displaying symptoms. An outbreak of chronic wasting disease in a herd could be deadly to the entire group, as prions are shed in urine and faeces, and can remain in soil for years, infecting other animals. But despite Yellowstone's abundant elk and deer populations, no cases of the disease have been detected in the park so far. 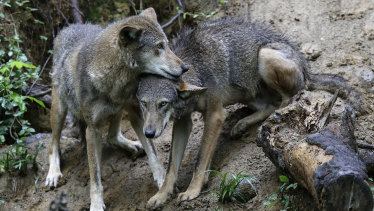 A pair of red wolves in the US.Credit:AP

Researchers from Penn State University, the US Geological Survey and the National Park Service believe the park's 10 wolf packs may hold the key. They hope to support the idea that predators can be used to manage the disease.

"Yellowstone in the US is the only place we can see if this is working,'' said Dr Ellen Brandell, who is leading the project, because of the overlap between high elk and wolf populations and chronic wasting disease cases nearby.

The park is home to 10 wolf packs and Dr Brandell believes the predators may be able to target and kill sick deer before the illness is detected by humans. "They are quite unsuccessful at hunting so they'll take the weakest ones – that's exactly the type of cue you want a predator to pick up on," she said.

Dr Brandell said researchers were sampling the carcasses of deer and elk which had been killed by wolves.

The preliminary research suggests that the absence of chronic wasting disease cases in the park may be evidence that their theory is correct.

Eerily-realistic child robot that can ‘feel pain’ created by scientists

Working from home is losing its effectiveness, bank execs say
We and our partners use cookies on this site to improve our service, perform analytics, personalize advertising, measure advertising performance, and remember website preferences.Ok